According to Eliyahu Hershfeld, Aidel's father, Rabbi Eliezer Szulewicz (or Shulevits) was born in Kolno and founded the yeshiva in Lomza. (See the June 2009 issue of the journal Landsmen for a short bio.) Rabbi Shulevitz was worried about the conscription of his children to the army, and apparently only one of his five or so sons actually took the name Shulevitz. Aidel Devorah was married to Rabbi Yechiel Mordechai Gordon, who took over the yeshiva in Lomza with his brother-in-law Yehoshua Zelig Ruch when their father-in-law Rabbi Shulevitz moved part of the yeshiva to Petach Tikva, Israel in 1923. Rabbi Gordon was on a fund raising trip to the USA when WW2 broke out, and survived, but his daughter and family who were in Lomza were killed. He later settled in Israel and was the head of the Lomza yeshiva in Petach Tikva till his death in 1964. See http://www.acoast.com/pub/sehc/hamaayan/0304/vaera.034 for some biographical info.

Eliyahu was kind enough to translate the full text of the stone:

"The translation is loose, since I find it hard to literally translate poetic text.

Here lies
A good ??? important woman
Fear of g-d never left her
The ways of the Torah, she followed with love
Her heart yearned to be close to mitzvos
There was anxiety in the heart of he husband and children
When she left them in the prime of her life
Broken hearted cries her relatives wailed
Many good people cried over her
A merciful mother to her 5 children
In the 42nd year of her life
Our dear and honored mother
The woman Aidel Devorah
daughter of Rabbi Eleizer
Shulevitz, the wife of Rabbi
Yechiel Mordechai
Gordon
Passed away in a good name 6 Shevat
Year [5]689 (to the small number)
May her soul be bound to the bond of life

The text on the right side of the monument forms the acrostic Aidel Devorah." 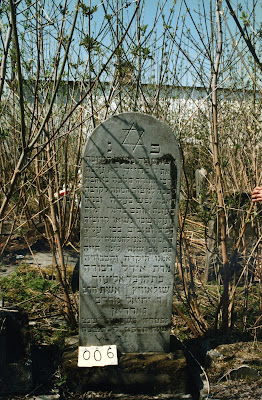 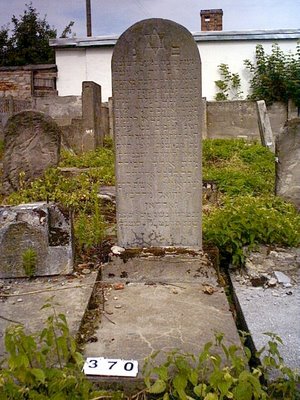 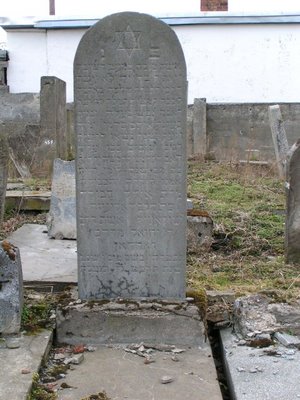