According to the stone, she died in late 1822. The cemetery is said to have opened that year, so this may be the oldest burial there.

The inscription has been translated as follows:

We go forth in weeping [unknown word]
Weeping over the death of our mother
A woman of valor, modest
and prominent. Hinda
the daughter of Baruch HaLevi, who passed away
On the eve of the Sabbath, 5 Cheshvan
5583 [1822]
May her soul be bound in the bonds of eternal life

(Thank you to Jerrold and Jan for the translation!) 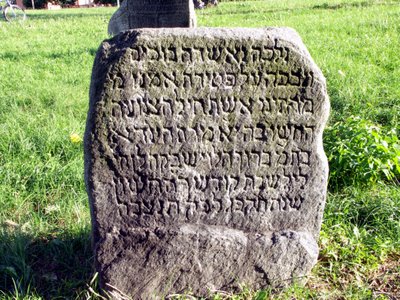 Comments:
This is incredible. If the information is accurate, this is my 5th great grandmother. How wonderful to find this. Thank you!

I believe she is an ancestor of mine. Thank you so much!!!